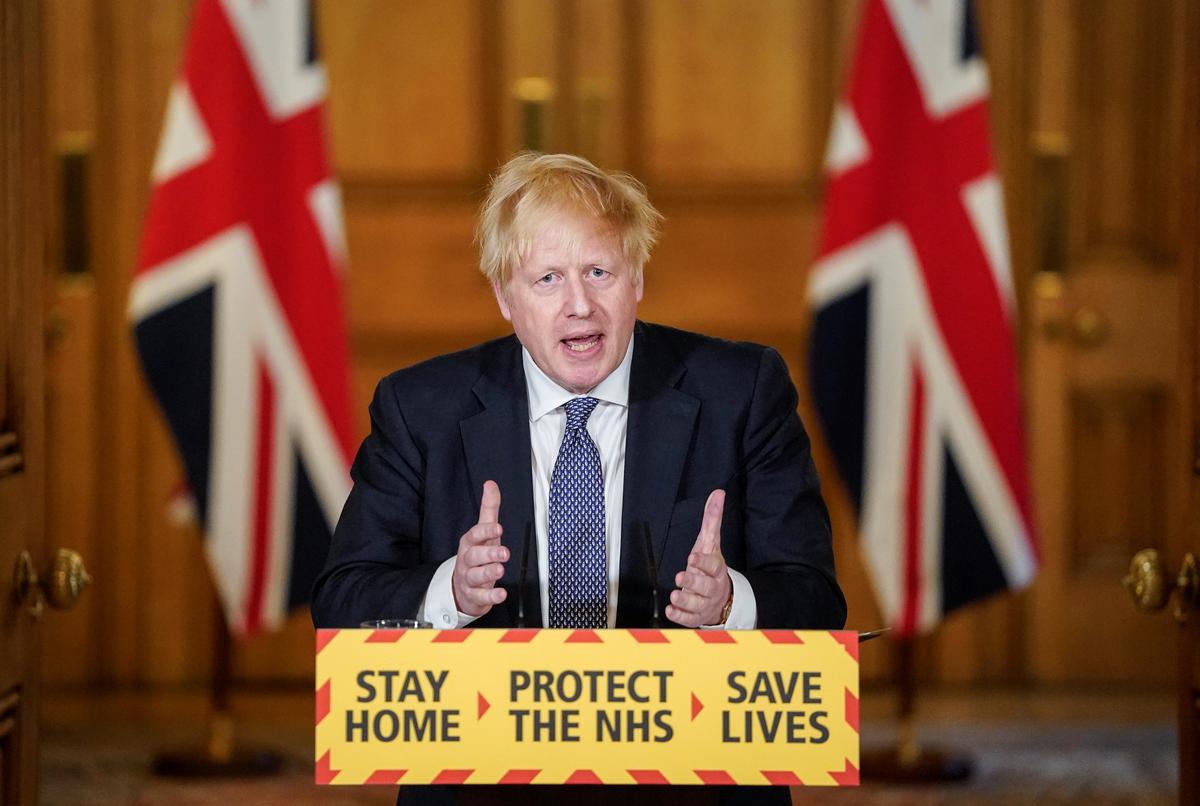 LONDON (Reuters) – Prime Minister Boris Johnson said on Thursday Britain was now past the peak of its coronavirus outbreak and promised to set out a plan next week on how the country might start gradually returning to normal life.

In his first news conference since recovering from a serious case of COVID-19, Johnson sought to offer hope to weary Britons, but urged them to stick with lockdown restrictions that are hammering livelihoods and the economy.

“I can confirm today that for the first time, we are past the peak of this disease. We’re past the peak and we’re on the downward slope, and we have so many reasons to be hopeful for the long term,” Johnson said.

Britain has the second-highest official COVID-19 death toll in Europe with 26,771 deaths. [nL9N2AV00A]

That has put pressure on the government over its initial response to the outbreak – which lagged some European peers – and informs its cautious approach towards lifting restrictions in case that leads to a second spike of infections.

Defending his handling of the outbreak, Johnson said the death toll could have been a lot worse.

“It’s thanks to that massive collective effort to shield the NHS (National Health Service) that we avoided an uncontrollable and catastrophic epidemic, where the reasonable worst case scenario was 500,000 deaths,” he said.

“It is vital that we do not now lose control and run slap into a second, an even bigger mountain.”

Under pressure to outline an exit strategy from the lockdown, Johnson promised to set out next week a “menu of options” on how restrictions could be eased, but said the exact dates of any change would be driven by scientific advice.

He said face coverings may play a part in the next phase, departing from the government’s line up until now, which was that there was insufficient evidence to call on the general public to start using them.

“As part of coming out of the lockdown, I do think that face coverings will be useful both for epidemiological reasons, but also for giving people confidence that they can go back to work,” said Johnson. “You’re going to be hearing more about that, and that kind of thing, next week.”

With testing seen as key to safely relaxing social distancing measures, the government had set itself a target of carrying out 100,000 daily tests for the virus by the end of this month.

The latest data showed that 81,611 tests were carried out in the 24 hours to 9 a.m. (0800 GMT) on Thursday, a marked increase since last week but still short of the target.

Britain’s Prime Minister Boris Johnson speaks during a daily news conference to update on the coronavirus disease (COVID-19), at 10 Downing Street in London, Britain April 30, 2020. Andrew Parsons/No 10 Downing Street/Handout via REUTERS THIS IMAGE HAS BEEN SUPPLIED BY A THIRD PARTY. NO RESALES. NO ARCHIVES. THIS IMAGE IS FOR EDITORIAL USE PURPOSES ONLY. THE IMAGE CAN NOT BE USED FOR ADVERTISING OR COMMERCIAL USE. THE IMAGE CAN NOT BE ALTERED IN ANY FORM.

With the spotlight on the death toll since the official daily number was amended to include deaths in all settings, not just in hospitals, Johnson and his top medical adviser, Chris Whitty, sought to downplay comparisons with other countries.

“Let’s not go charging in to ‘who’s won and who’s lost’ at this point,” Whitty said.

“Every country measures its COVID cases in a slightly different way so comparing them to one another is largely a fruitless exercise.”

Johnson returned to work on Monday having recovered after being infected with the virus, which left him gravely ill in intensive care at the peak of the outbreak.

On Wednesday, his fiancee Carrie Symonds gave birth to the couple’s son. Delaying any paternity leave, Johnson chaired a virtual meeting of his cabinet earlier on Thursday.

A first review into the lockdown must come before May 7 and scientific advisers have been presenting ministers with options on how it might be eased.

“I will be setting out a comprehensive plan next week to explain how we can get our economy moving… how we get our children back to school, back into childcare … how we can travel to work and how we can make life in the workplace, safer,” Johnson said.

Asked whether the long-term recovery plan would involve austerity to offset the huge cost of propping up the economy during the lockdown, Johnson said he did not like the term austerity and indicated it would not be his preferred approach.

The opposition Labour Party has accused the government of being slow to react to the crisis by delaying the lockdown and then failing to ramp up the provision of protective equipment to frontline staff and the number of tests.

Johnson said he would not minimise those “knotty and infuriating” problems, but that huge progress was being made.