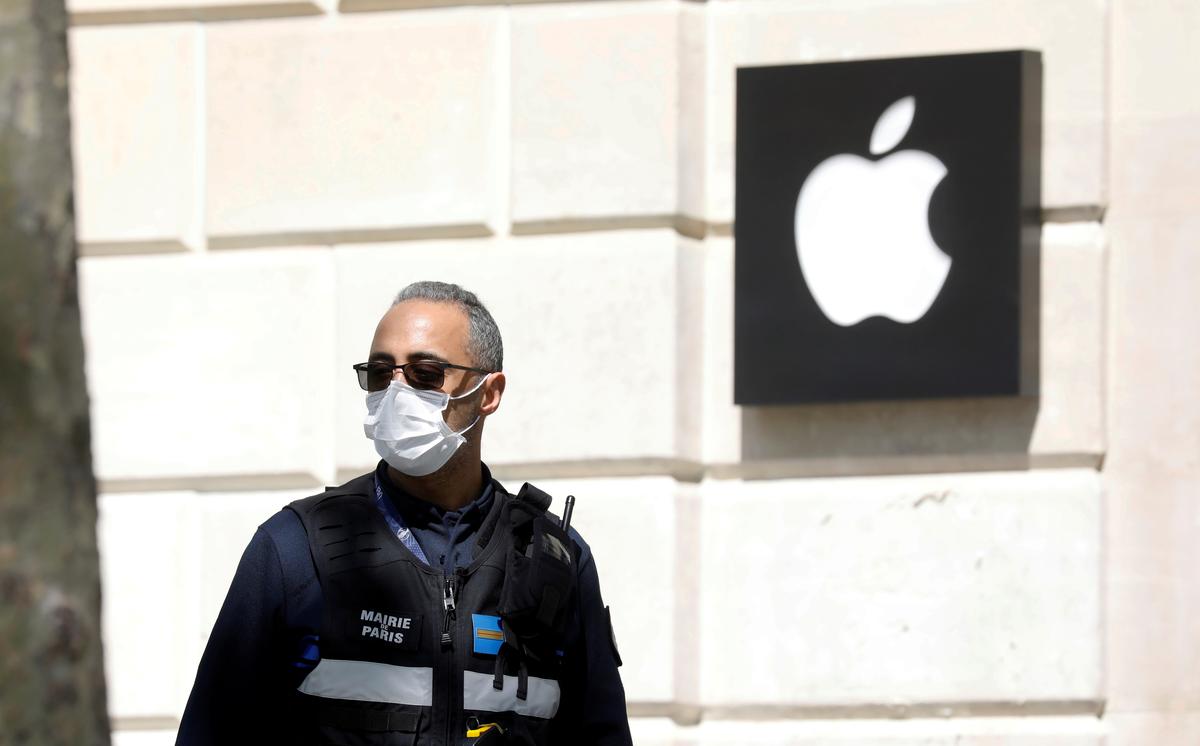 FILE PHOTO: A municipal policeman wearing a protective face mask walks past the closed Apple store on the Champs-Elysees avenue in Paris as a lockdown is imposed to slow the rate of the coronavirus disease (COVID-19) in France, April 16, 2020. REUTERS/Charles Platiau/File Photo

But Cook said it was impossible to forecast overall results for the current quarter because of uncertainty created by the virus.

With its global brand, few American companies have been exposed to the spread of the coronavirus like Apple, whose iPhone sales declined in the March quarter as device sales were forced to online-only in many places. Sales of services such as streaming television content rose with billions of people locked in their homes. China, where the virus was first detected, is both a major market for Apple, supplying about a sixth of its overall sales, and is also home to most of Apple’s contract factories.

Apple saw China sales of $9.46 billion, down less than a $1 billion from a year ago, a potential sign of how the company will fare as other markets emerge from lockdowns.

“When the lockdown went into effect at the end of January, we saw a very steep falloff in demand for the month of February,” Cook told Reuters. Apple slowly reopened Chinese stores, with all running again by mid-March. “As compared to February, we saw a nice improvement in March and a further improvement in April. China is headed in the right direction.”

Apple reported sales of $58.3 billion and earnings of $2.55 per share for its fiscal second quarter ended in March, above year-ago results of $58 billion and $2.46, and above analyst estimates of $54.5 billion and $2.27, according to IBES data from Refinitiv. Apple shares, which closed up over 2%, wavered after the results, dropping 1.7% after an earlier slight rise in extended trading.

Cook said that during the first five weeks of the fiscal second quarter, “it was an incredible time where we were growing very fast and we were set to essentially come in at the high end of our guidance” of between $63 billion and $67 billion in sales. The quarter quickly changed when the virus spread in China, hitting Apple’s supply chain and sales there, and then hit the rest of the world as Apple’s stores and contract factories came back online. Apple broke with its usual practice of providing an estimated range of sales for the current quarter.

“The question is: When do stores reopen, when do the shelter-in-places come off, when is it comfortable to go back to working in stores and having consumers come out?” Cook said. “Rather than pretend we can project it, we’re being very straightforward and saying we lack the visibility to do it.”

In February, Apple warned investors that it was unlikely to meet its financial guidance for the March quarter and could face iPhone shortages as lockdown orders in China kept factories closed and forced Apple to shutter its stores there.

Apple reopened its stores in China in mid-March and factories resumed production – but by that time, the pandemic had spread to Europe and the rest of the world, which have left Apple stores outside mainland China, Hong Kong, Taiwan and South Korea shuttered.

“Growth of 1% in this environment is impressive, particularly given some of the extent of Apple’s exposure to the earlier lockdowns in Asia,” said eMarketer analyst Yoram Wurmser.

The closures, along with lockdown orders in many major Apple markets such as the United States and Europe, have forced Apple and its biggest sales partners in the retail and mobile carrier industries to conduct most sales online or via curbside pickup, including of the newly launched iPhone SE 2.

Cook declined to comment on whether Apple faces supply chain disruptions for devices that will be released later this year, saying the company does not comment on future products. He said Apple’s supply chain was “back up and running at full-throttle at the end of March.”

Cook said that he was pleased with early sales of the new device, along with new Macs and iPads released during the fiscal second quarter, but that Apple would be subject to broader market forces in the coming months.

“We’re clearly not immune to the macroeconomic environment – I’m not sure hardly anybody is immune at this point,” Cook told Reuters. “As compared to the last part of March and the beginning of April, we’ve seen a better second half of April.”

Apple said iPhone sales were $29.0 billion, down from $30.9 billion the year before compared with analyst estimates of $28.4 billion, to data from FactSet.

Sales for Apple’s services segment, which includes iCloud storage as well as its streaming services for music and television shows, were $13.4 billion, compared with analyst estimates of $12.9 billion, according to FactSet data. Cook said Apple had 515 million subscribers to apps and services on Apple’s platform, up by 125 million from one year earlier.

Apple’s wearables and accessories segment, which includes Apple’s AirPods and Apple Watch, were $6.3 billion, compared with analyst estimates of $6.7 billion, according to FactSet data.

Reporting by Stephen Nellis in San Francisco and Munsif Vengattil in Bengaluru; Editing by Lisa Shumaker