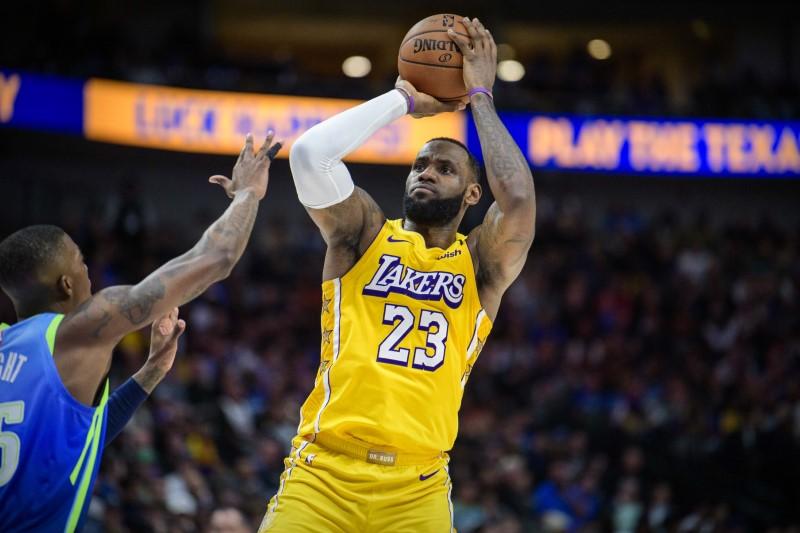 LeBron James had 35 points, 16 rebounds and seven assists to lead the visiting Los Angeles Lakers to their seventh straight win, a 129-114 decision against the Dallas Mavericks on Friday night.

Kyle Kuzma started in place of Anthony Davis and scored a season-high 26 points for the Lakers. Davis, the leading scorer (27.1 points per game) and rebounder (9.4 boards per game) for the Lakers, sat out after taking a hard fall against the visiting New York Knicks on Tuesday night and sustaining a contusion to his gluteus maximus.

Dallas forward Luka Doncic, who came in third in the NBA in both scoring (29.6 ppg) and assists (9.0 per game), got off to a slow start before finishing with 25 points, 10 rebounds and seven assists. However, he committed a game-high six turnovers.

Tim Hardaway Jr. added 22 points for the Mavericks, who have dropped five of seven, and Seth Curry scored 16 off the bench.

Devin Booker hit a 3-pointer, stole a pass and buried another trey in a 16.9-second flurry in the final minute, allowing Phoenix to overtake visiting Orlando.

Booker drilled a 26-footer to get the Suns within one with 52.9 seconds left. Then, he stole a Markelle Fultz pass and buried another from behind the arc, giving Phoenix a 96-94 lead with just 36 seconds to go.

Seeking a third straight win, Orlando had two subsequent chances to tie, but Nikola Vucevic had the ball stolen by Ricky Rubio, and after the Suns guard made it a three-point game by sinking one of two free throws, Evan Fournier misfired on a 3-pointer with nine seconds to go.

Khris Middleton recorded 27 points and 11 rebounds to help Milwaukee post a victory over host Sacramento. The Bucks (34-6) achieved the top 40-game start in franchise history, one win better than the 1970-71 team led by Hall of Famer Kareem Abdul-Jabbar.

Eric Bledsoe scored 24 points and Donte DiVincenzo added a career-high 18 for the Bucks. Giannis Antetokounmpo had 13 points, 10 rebounds and five assists, and Sterling Brown had 11 points and a season-best 12 rebounds for his first career double-double.

Kawhi Leonard scored 21 of his 36 points in the second half, leading Los Angeles to a come-from-behind victory over visiting Golden State.

The Clippers overcame a 10-point, fourth-quarter deficit despite playing without All-Star Paul George, who sat out after aggravating a left hamstring strain in practice earlier this week. George, who initially sustained the injury against the Detroit Pistons on Jan. 2, is also expected to miss Los Angeles’ road game against the Denver Nuggets on Sunday.

Leonard, who converted 14 of 25 shots from the floor, also had nine rebounds, five assists and three steals. Lou Williams scored 21 points for the Clippers. Omari Spellman and Glenn Robinson III scored 17 apiece for the Warriors, who lost for the seventh consecutive game. Alec Burks added 16 points and a team-high eight rebounds.

Jonas Valanciunas totaled 21 points, Morant also had 14 assists, and De’Anthony Melton and Brandon Clarke scored 13 and 10 points, respectively, for Memphis. The Grizzlies play their next four games at home and eight of their next 11 games are against teams with losing records.

DeMar DeRozan scored a season-high 36 points for the Spurs while LaMarcus Aldridge and Bryn Forbes had 21 points each and Rudy Gay added 13 points for San Antonio.

Miami, which got a game-high 33 points and nine rebounds from Jimmy Butler, led 109-100 with 5:09 left in the fourth quarter before Brooklyn rallied. Heat center Bam Adebayo showed his versatility with 22 points, six rebounds and seven assists.

LeVert had missed seven of his first eight 3-pointers before connecting late. This was just his third game back since missing eight weeks due to a thumb injury. His second 3-pointer — with 69 seconds left — gave Brooklyn a 112-111 lead. The Nets did not trail after that.

Brandon Ingram continued his hot play by scoring a game-high 28 points as New Orleans pulled away late for a win in New York. The Pelicans have won eight of 11 since Dec. 18, when they snapped a franchise-record 13-game losing streak. The Knicks have lost five straight — their second losing streak of at least five games this season.

Ingram has scored at least 25 points in seven of his past 11 games. He added nine assists and six rebounds.

Jaxson Hayes (18 points, 10 rebounds) posted a double-double for the Pelicans and went 7-for-8 from the field, missing only his last attempt. Taj Gibson scored 19 points on 8-of-8 shooting from the field for the Knicks, who had all five starters score in double figures.

The Hawks led 89-83 on a John Collins basket with 8:39 left. But the Wizards went on a 24-8 run, taking the lead for good at 94-93 on McRae’s driving layup with 5:03 remaining. The Wizards were playing without guard Bradley Beal, who missed his fifth straight game with lower right leg soreness. Washington was missing four regulars.

Atlanta’s Trae Young was held to 19 points — 10.2 below his season average — and went 0-for-7 on 3-pointers. He had scored 40-plus in two of the previous three games. Kevin Huerter scored 16 before fouling out in the fourth quarter. Collins had a double-double with 15 points and 15 rebounds.

Myles Turner registered a double-double with 27 points and 14 rebounds, and Aaron Holiday added 19 points to lead visiting Indiana to a victory against Chicago.

Five Indiana players scored in double figures as the Pacers overcame the absence of leading scorer Domantas Sabonis, who missed the game with a sore left knee.

Zach LaVine scored a game-high 43 points for the Bulls, who lost their season-high sixth straight game. T.J. Warren (17 points), Doug McDermott (16) and Edmond Sumner (10) rounded out the balanced attack for the Pacers, who led by as many as 16 points.

Bojan Bogdanovic scored 16 points and Georges Niang added 15 as the Jazz won their sixth consecutive home game in advance of a three-game road trip through Washington, Brooklyn and New Orleans.

Terry Rozier scored 23 points and Miles Bridges added 11 as the Hornets lost their third consecutive game and fell for the ninth time in their last 11 games. Rozier saw his career-long streak of games with at least 25 points come to an end at four.