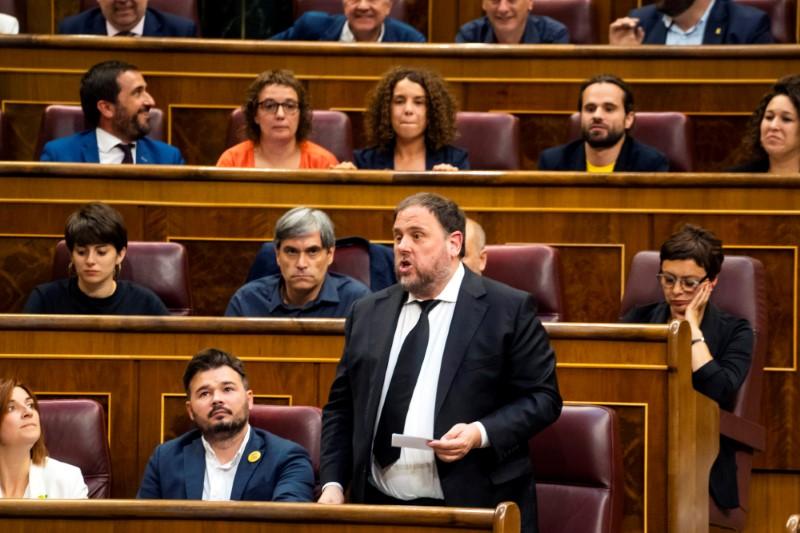 FILE PHOTO: Jailed Catalan politician Oriol Junqueras takes the oath as a deputy during the first session of parliament following a general election in Madrid, Spain, May 21, 2019. Angel Navarrete/Pool via REUTERS

BRUSSELS (Reuters) – Jailed Catalan leader Oriol Junqueras’ mandate as a European Union (EU) lawmaker is over, the legislature’s head said on Friday, in a blow to the Spanish separatist movement.

European Parliament president David Sassoli said decisions this month by Spain’s electoral board and Supreme Court blocking Junqueras from occupying his seat meant he had effectively no longer been a legislator for the bloc from Jan. 3.

Junqueras was sentenced to 13 years in prison in Octoberover his role in Catalonia’s failed bid for secession in 2017.He was elected an EU parliament member while in prison awaiting the verdict, but has not been able to take up his seat.

His case had got a boost last month after the EU’s highest tribunal ruled Junqueras was entitled to immunity, but Spain’s Supreme Court rejected that on Thursday.

Junqueras’ Esquerra Republicana de Catalunya (ERC) party said it was “outraged” by the EU parliament’s decision and would appeal. “We … demand that … the interests of a member state do not prevail over the interests of the union,” it said.

Spain’s constitution prohibits regions from breaking away and the Catalan independence drive, including a banned referendum in 2017, has been a national political crisis.