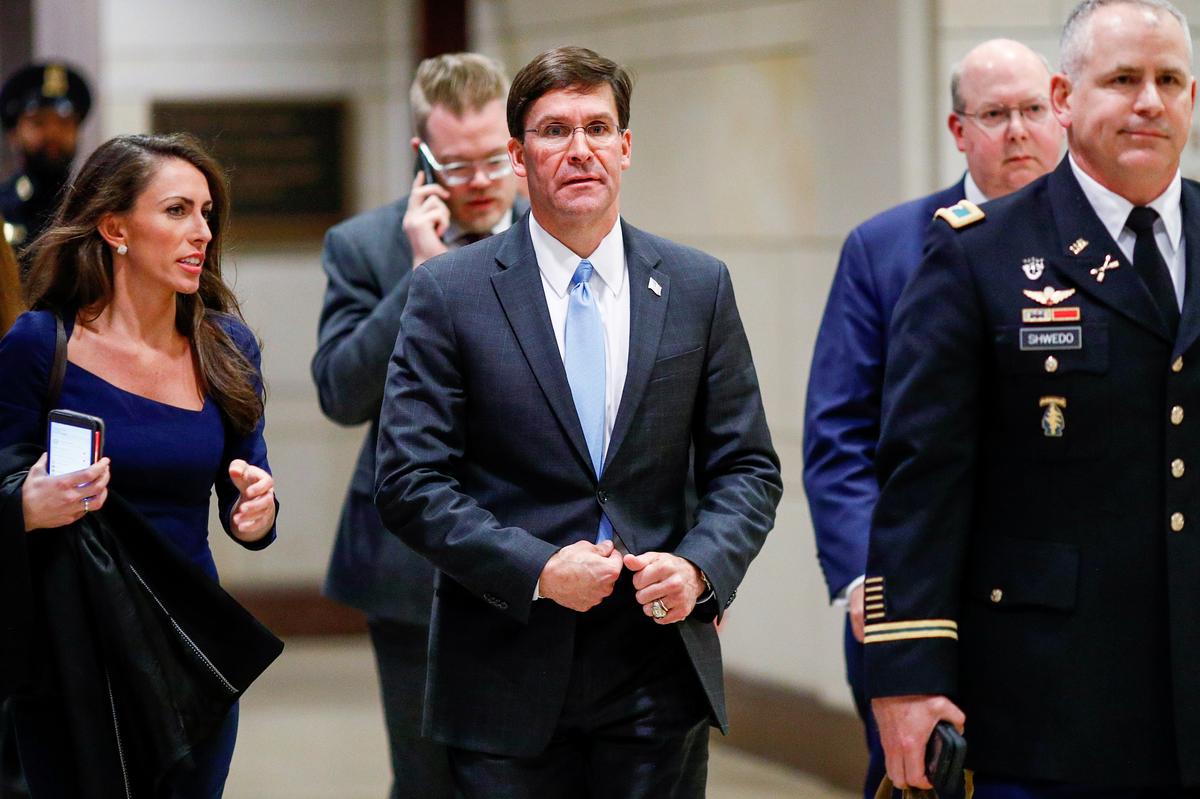 WASHINGTON (Reuters) – Trump administration officials will brief the U.S. Congress on Wednesday on the killing of an Iranian commander that has sparked a new Middle East crisis, as Democrats push for legislation to rein in the president’s ability to launch a war.

U.S. Defense Secretary Mark Esper arrives to brief members of the U.S. Senate on developments with Iran after attacks by Iran on U.S. forces in Iraq, at the U.S. Capitol in Washington, U.S., January 8, 2020. REUTERS/Tom Brenner

The classified briefings will come just hours after Iranian forces fired missiles at military bases housing U.S. troops in Iraq, in retaliation for the killing of the Iranian general, raising the stakes in its conflict with Washington amid concern of a wider war in the Middle East.

President Donald Trump broke precedent by failing to inform congressional leaders before ordering last week’s drone strike. And he angered some lawmakers, particularly Democrats, by making classified his formal report to Congress about the strike as he sent more troops to the Middle East.

The U.S. Constitution grants Congress, not the president, the right to declare war. Some lawmakers have been trying for years – under Democratic President Barack Obama as well as under Trump – to wrest back that authority from the White House.

The Democratic-controlled House may pass legislation this week that would require the removal of U.S. forces from hostilities with Iran within 30 days, unless Congress declares war or authorizes the use of military force.

A similar measure has been introduced in the Senate, which is controlled by Trump’s fellow Republicans who rarely oppose his initiatives, dimming its prospects of passage.

Esper told journalists on Tuesday that Soleimani was planning an attack that threatened U.S. interests, which was to be executed within days rather than weeks.

A source familiar with what Trump administration officials told congressional and intelligence committee leaders at a briefing on Tuesday said that, while they were given fairly persuasive evidence Soleimani was actively engaged in plots directed against Americans, the administration has not yet provided convincing evidence such attacks were “imminent.”

Lawmakers have demanded more information, including public testimony, about any threat from Iran and the military’s response. In a letter released on Wednesday, top Senate Democrats asked Esper and Milley for regular briefings and documents about any troop deployments.

The strike against Soleimani prompted retaliation by Tehran.

Iranian state television said Iran had fired 15 ballistic missiles from its territory at U.S. targets in neighboring Iraq on Wednesday. One source in Washington said early indications were that there were no U.S. casualties, while other U.S. officials declined to comment.

As tensions have risen, some lawmakers have accused Trump of inadequately considering the consequences of ordering the drone strike.

Democratic Senator Bob Menendez said the result of the strike against Soleimani was “Confusion, contradictions, chaos,” with Iraq voting for the removal of U.S. troops and uncertainty about the future of the fight against Islamic State militants.

“The president must come to Congress and present clear and compelling evidence as to why the strike against Soleimani was absolutely necessary. What was the imminent threat that Soleimani uniquely possessed?” Menendez said in a Senate speech.