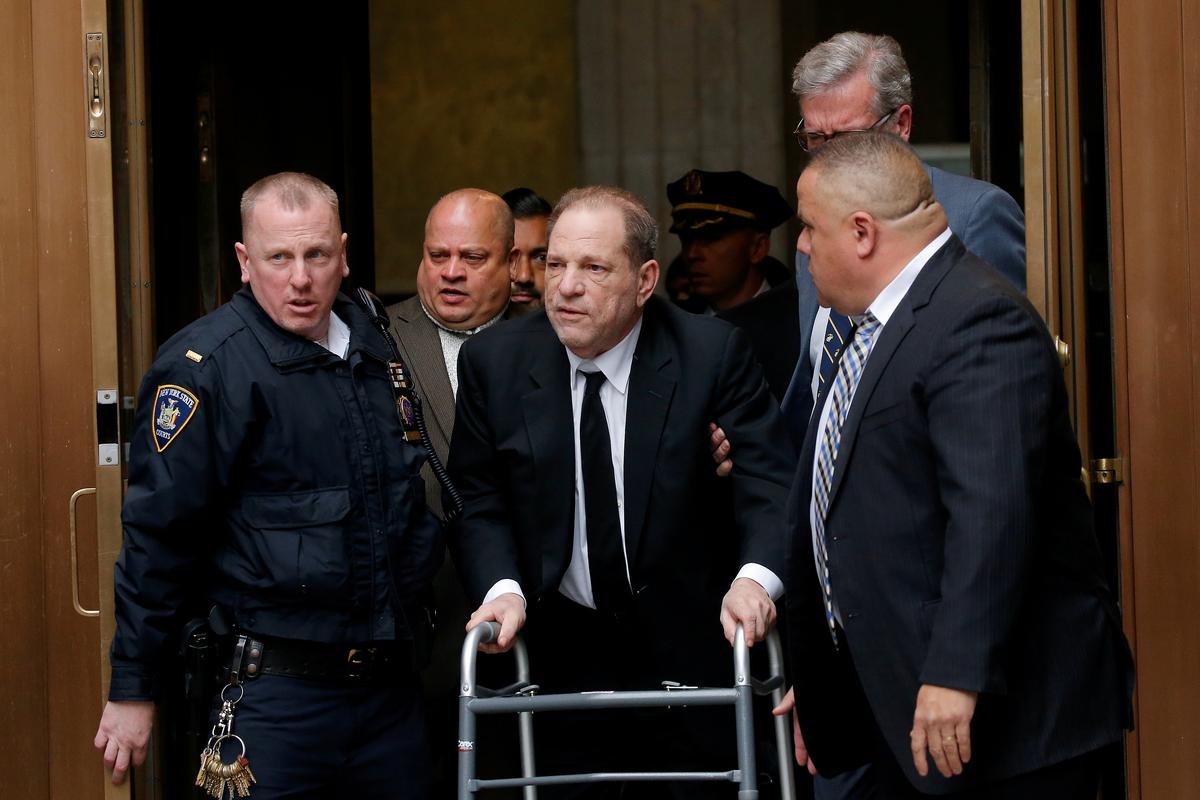 NEW YORK (Reuters) – Once powerful Hollywood producer Harvey Weinstein was indicted in Los Angeles on Monday on sex crime charges just hours after he appeared in a New York court for the start of his rape trial, which has become a focal point for the #MeToo movement.

Weinstein was charged with sexual assault of two women in 2013, Los Angeles District Attorney Jackie Lacey said in a statement. He was charged with raping one woman and sexually assaulting the other.

“We believe the evidence will show that the defendant used his power and influence to gain access to his victims and then commit violent crimes against them,” Lacey said.

Weinstein, 67, has pleaded not guilty to charges of assaulting two women in New York. He faces life in prison if convicted on the most serious charge, predatory sexual assault.

On Tuesday, lawyers in the New York case will start pre-screening jurors, asking them whether they can be impartial and to fill out written questionnaires. A second phase of jury selection is scheduled to begin on Jan. 14, though the judge overseeing the case said that date was “optimistic.”

The court sent jury questionnaires to 2,000 potential jurors, according to a spokesman for the Office of Court Administration.

“Once the defendant’s case is completed in New York, we expect him to appear in a courtroom in Los Angeles County to face these charges,” the Los Angeles prosecutor said.

More than 80 women have accused Weinstein of sexual misconduct dating back decades.

Weinstein has denied the allegations, saying any sexual encounters he had were consensual.

Those accusations helped fuel the #MeToo movement, in which hundreds of women have publicly accused powerful men in business, politics, the news media and entertainment of sexual harassment or assault.

Prosecutors in Los Angeles said Weinstein went to a hotel room on Feb. 18, 2013, forced his way into an unidentified woman’s room and raped her.

The next evening, Weinstein allegedly assaulted a woman in a hotel suite in Beverly Hills, the prosecutor said.

Weinstein faces up to 28 years in state prison if convicted on the charges, Lacey said.

The indictment heightened the emotions of women who have been part of the #MeToo movement.

“L.A. INDICTMENT! Cant breathe,” wrote Rose McGowan, who has accused Weinstein of raping her, on Twitter. “Happy trial day to you, Mr. Weinstein. Welcome to the rest of your life, hope you’ll have as much fun as we have had being in your jail.”

Earlier on Monday, Weinstein hobbled in and out of the Manhattan court, aided by a walker and with a member of his team holding his arm as he recovers from recent back surgery.

Judge James Burke ordered Weinstein’s lawyer Rotunno to refrain from talking about witnesses, after she was accused of making degrading and humiliating comments in recent interviews, which she denied.

One of the women Weinstein was charged with assaulting, former production assistant Mimi Haleyi, has said that Weinstein sexually assaulted her in 2006. Prosecutors say Weinstein raped the second woman, who has not been publicly identified, in 2013.

Nearby the courthouse, the Silence Breakers, a group of Weinstein accusers including actresses Rosanna Arquette and McGowan, held a news conference and waved signs demanding accountability for Weinstein.

“As we stand here at the beginning of a new year and a new decade, time’s up on sexual harassment in all workplaces,” said Arquette, referencing the #TimesUp movement that opposes sexual harassment. “And time’s up on the pervasive culture of silence that has enabled abusers like Weinstein.”

Juda Engelmayer, a Weinstein spokesman, said on Thursday that the two women in the New York criminal case had long-term relationships with Weinstein. He said it was prejudicial to conflate the criminal matter with allegations in civil cases or with public grievances he said were lodged by women who were not part of any lawsuit.

Allegations against Weinstein first were reported in the New York Times and The New Yorker magazine in October 2017.

Within days, the Academy of Motion Picture Arts and Sciences, which selects Oscar winners, had expelled Weinstein. On Oct. 15, Alyssa Milano tweeted: “If you’ve ever been sexually harassed or assaulted write ‘me too’ as a reply to this tweet.”

#MeToo became one of the most used widely used hashtags. In 2019 it was viewed 42 billion times, according to data from Brandwatch, a research firm.