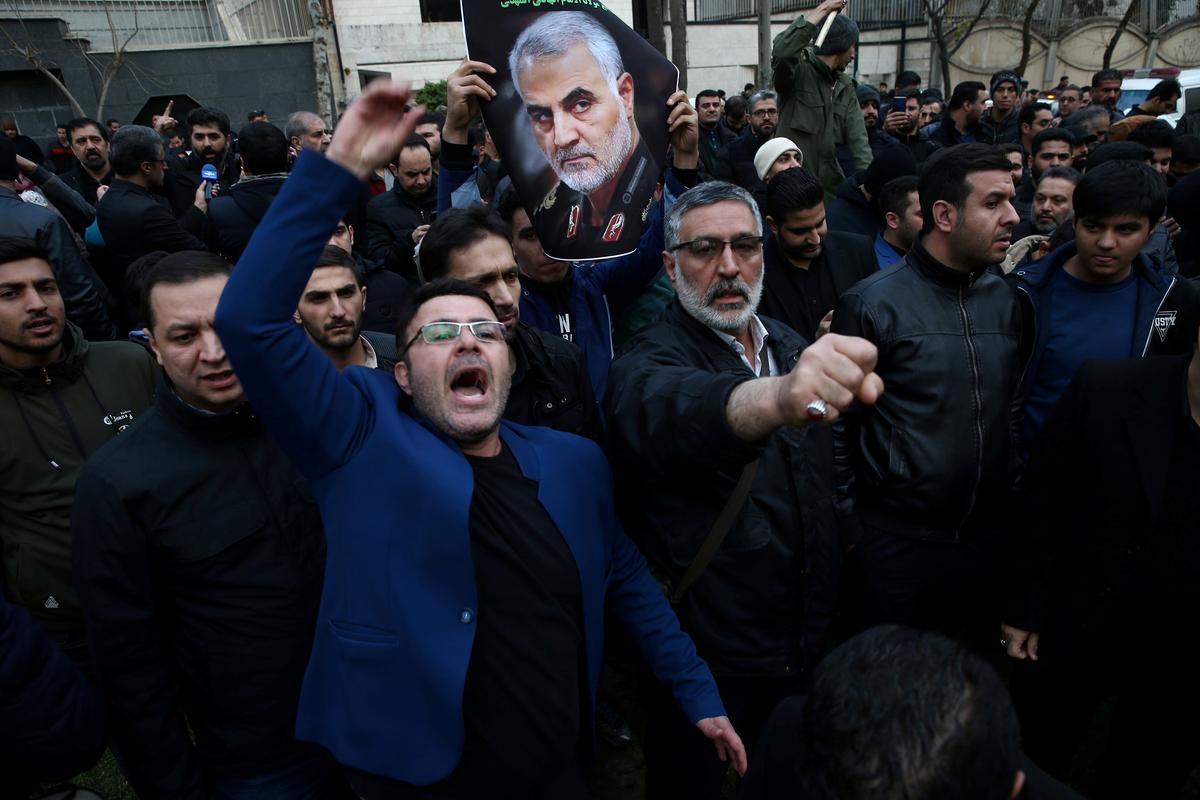 BAGHDAD (Reuters) – Thousands of mourners gathered in Baghdad on Saturday ahead of a funeral procession for Iran’s slain military commander Qassem Soleimani, Iraqi militia leader Abu Mahdi al-Muhandis and others killed in a Friday U.S. air strike in Iraq.

FILE PHOTO: Iranian demonstrators react during a protest against the killing of the Iranian Major-General Qassem Soleimani, head of the elite Quds Force, and Iraqi militia commander Abu Mahdi al-Muhandis, who were killed in an air strike at Baghdad airport, in front of United Nations office in Tehran, Iran January 3, 2020. Nazanin Tabatabaee/WANA (West Asia News Agency) via REUTERS/File Photo

Friday’s attack on Baghdad airport, authorised by U.S. President Donald Trump, was a major escalation in a “shadow war” in the Middle East between Iran and the United States and American allies, principally Israel and Saudi Arabia.

Soleimani was Tehran’s most prominent military commander and the architect of its growing influence in the Middle East. Muhandis was the deputy commander of Iraq’s Popular Mobilisation Forces (PMF) umbrella grouping of paramilitary groups.

Mourners started gathering in Baghdad’s streets from the morning ahead of the start of the procession, waving Iraqi and militia flags in a sombre atmosphere.

Iraqi state television had said they were U.S. air strikes but the U.S.-led coalition fighting Islamic State later denied any involvement, saying it did not conduct any recent attacks near the camp north of Baghdad.

“FACT: the coalition … did not conduct airstrikes near Camp Taji (north of Baghdad) in recent days,” a coalition spokesman said on Twitter.

U.S.-Iranian hostilities have been playing out in Iraq since last week when pro-Iranian militia attacked the U.S. Embassy in Baghdad following a deadly U.S. air raid on the Kataib Hezbollah militia, founded by Muhandis.

Many condemned the strikes, seeing Soleimani as a hero for his role in defeating the Islamic State militant group. Others voiced approval, saying Soleimani and Muhandis had backed the use of force against unarmed anti-government protesters last year and established militias that demonstrators blame for many of Iraq’s social and economic woes.

Many Iraqis criticised Washington for killing the men on Iraqi soil and possibly plunging Iraq into another war.