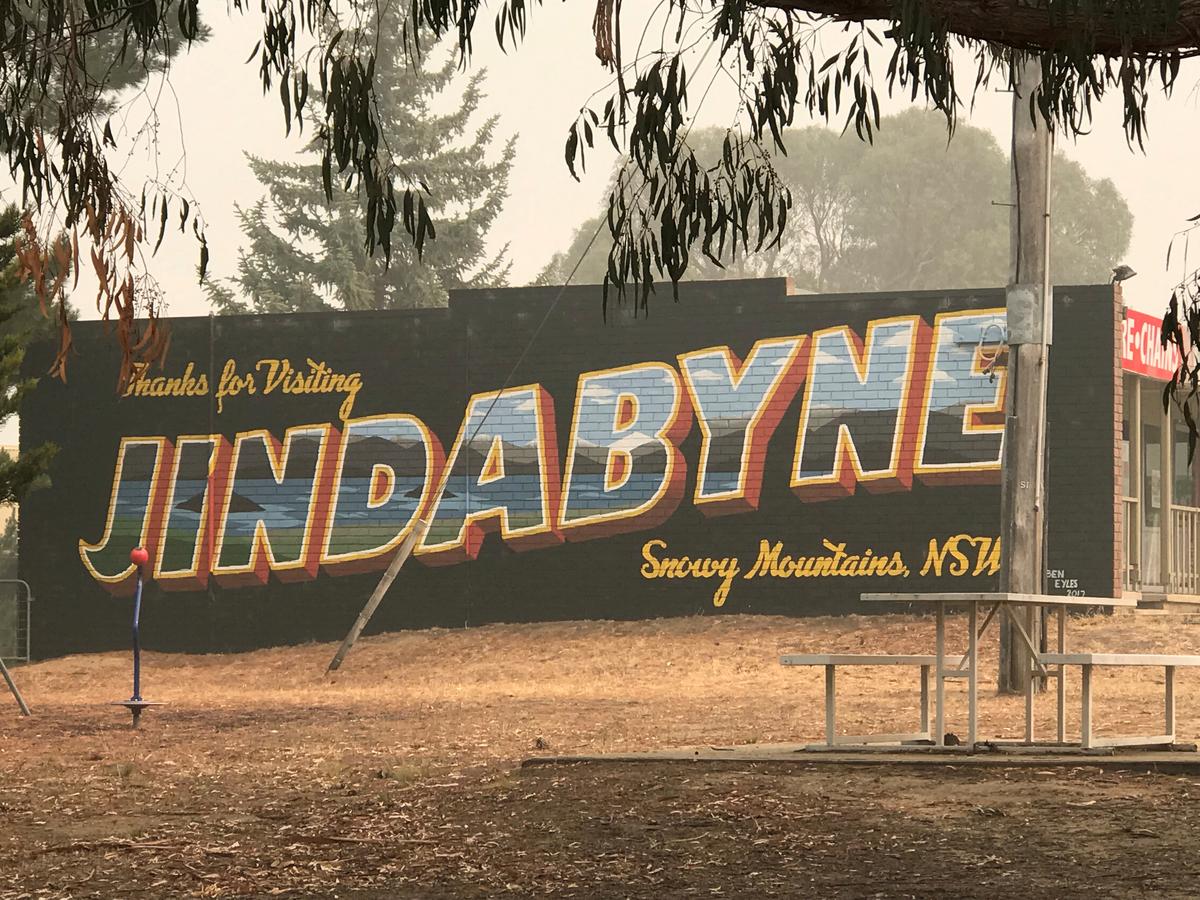 SYDNEY (Reuters) – The Australian village of Thredbo in the Snowy Mountains region has been evacuated and is under threat from fast-approaching fires that have razed bushland in the country’s east.

A mural is seen on the side of a building in Jindabyne, a township affected by the Dunns Road bushfire, in New South Wales, Australia, January 3, 2020, in this image obtained via social media. Sharon Dawson via REUTERS

The mountain area is located 200 km (125 miles) inland from the mass exodus occurring along the country’s more heavily populated south-east coast, where fires have claimed 10 lives since Monday.

Those in mountain and valley towns told Reuters they felt vulnerable after fire-fighting resources had been redeployed away from their towns to help with the deadly coastal blazes.

“We’ve just locked it up and gone – we could lose the entire village,” said Stephen Turner, owner of the Aneeki Ski Lodge in Thredbo.

“Almost all our firefighters have gone to the south coast and they won’t leave a fire to come and fight a fire,” said Turner, who added that there would usually be a few thousand people living and staying in the village this time of year.

While the mountainous region is best known for its winter ski fields, it also attracts large numbers of tourists in summer drawn by the cooler climate and outdoor activities.

The New South Wales (NSW) Rural Fire Service did not immediately respond to requests for comment on Friday.

Authorities had ordered all people to leave the Kosciuszko National Park, which includes Thredbo, by mid-morning on Friday.

The main fire fronts are forecast to hit the ski village on Saturday as wind speeds pick up and temperatures rise.

Fires are also threatening towns just outside of the national park, such as Jindabyne, where residents were told on Friday at community briefings that the fires could not be contained.

“Back burning operations in place to protect assets as well as other measures,” Kean tweeted.

Fires are currently burning near transmission lines that run from the scheme south into Victoria.

The hydro scheme provides around one-third of all renewable energy available to the eastern mainland grid, according to the project operator.

The region was last devastated by fire in 2003, although towns were able to draw upon fire-fighting resources deployed from other areas.

This season’s fires have stretched crews battling deadly blazes across the continent made worse by tinder dry conditions caused by a three-year drought in many areas.

The fires have destroyed vineyards in South Australia, blackened entire towns in Victoria and New South Wales, and led to the evacuation of tens of thousands of residents and tourists.

Jindabyne resident Sharon Dawson said she evacuated with her family on Friday.

“The streets were like a ghost town this morning,” said Dawson, who was traveling out of the fire zone to the nation’s capital of Canberra on Friday.

“Most people are either at home preparing for the fires or have evacuated.”

Reporting by Jonathan Barrett in Sydney; Editing by Sam Holmes