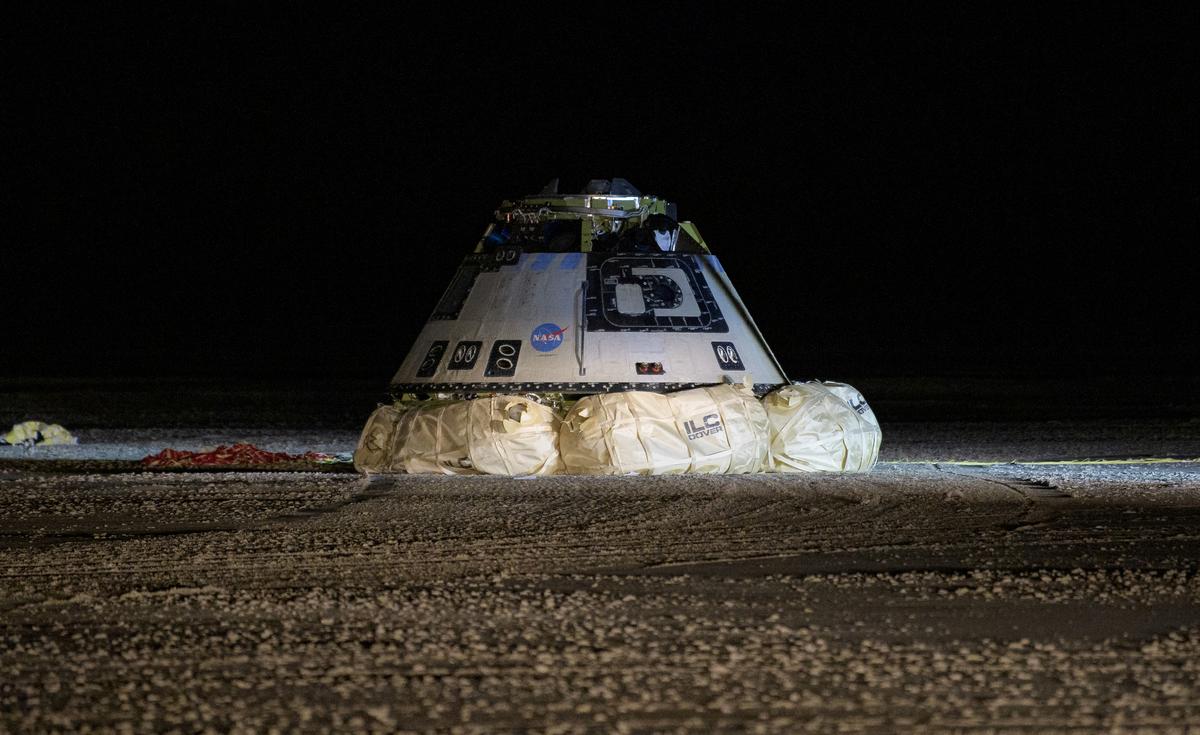 WASHINGTON (Reuters) – Boeing Co’s (BA.N) Starliner astronaut spacecraft made a “bull’s-eye” landing in the New Mexico desert on Sunday, a successful ending to a crewless test mission that two days earlier failed to reach the orbit needed to dock with the International Space Station.

The Boeing CST-100 Starliner spacecraft, which had been launched on a United Launch Alliance Atlas V rocket, is seen after its descent by parachute following an abbreviated Orbital Flight Test for NASA’s Commercial Crew programs in White Sands, New Mexico, U.S. December 22, 2019. NASA/Bill Ingalls via REUTERS

The 7:58 a.m. ET (1258 GMT) landing at the White Sands desert capped a turbulent 48 hours for Boeing’s botched milestone test of an astronaut capsule that is designed to help NASA regain its human spaceflight capabilities.

A software problem on Friday caused the capsule to fail to attain the orbit needed to rendezvous with the space station, another unwelcome engineering black eye for Boeing in a year that has seen corporate crisis over the grounding of its 737 MAX jetliner following two fatal crashes of the aircraft.

Officials from the aerospace company and NASA breathed sighs of relief following the landing, a highly challenging feat.

“Today it couldn’t really have gone any better,” Boeing space chief executive Jim Chilton told reporters on Sunday, adding that experts would need weeks to analyze the data from this mission before determining if Boeing could move forward with its plan to send a crewed mission on the craft in 2020.

The landing, which tested the capsule’s difficult reentry into the atmosphere and parachute deployment, will yield the mission’s most valuable test data after it failed to meet one of its core objectives of docking to the space station.

“We’re going to get I think a lot more data than we would have gotten if the test had gone according to plan,” NASA Administrator Jim Bridenstine said.

After Starliner’s touchdown, teams of engineers in trucks raced to inspect the vehicle, whose six airbags cushioned its impact on the desert surface as planned, a live video feed showed.

The spacecraft was in good condition after landing, Chilton said, with little charring and stable air pressure and temperature in the cabin.

The CST-100 Starliner’s debut launch to orbit was a milestone test for Boeing. The company is vying with SpaceX, the privately held rocket company of billionaire high-tech entrepreneur Elon Musk, to revive NASA’s human spaceflight capabilities. SpaceX carried out a successful unmanned flight of its Crew Dragon capsule to the space station in March.

After the Starliner capsule was launched from Florida on Friday, an automated timer error prevented it from attaining the right orbit to meet and dock with the space station.

Starliner’s three main parachutes deployed just over one mile (1,600 meters) from the Earth’s surface on Sunday after enduring intense heat from the violent reentry through the atmosphere, plummeting at 25 times the speed of sound.

The parachute deployment, one of the most challenging procedures under the program to develop a commercial manned space capsule, earned Boeing a win after a previous mishap where one parachute failed to deploy during a November test of Starliner’s abort thrusters.

That test tossed the capsule miles into the sky to demonstrate its ability to land a crew safely back on the ground in the event of a launch failure.

For the current mission, Boeing and NASA officials said they still do not understand why software caused the craft to miss the orbit required.

All past U.S. capsules, including SpaceX’s Crew Dragon, splashed down in the ocean. Russia’s Soyuz capsules and China’s past crew capsules made land landings.

The now-retired Space Shuttle used to glide in like a massive plane. (Graphic: tmsnrt.rs/2Q8mzCR)